Tips and tricks for troubleshot HUAWEI GOOGLE NEXUS 6P problems. The first time HUAWEI produce Google Nexus phone is NEXUS 6P, but 6P not mean 6 inches, because this phone have 5.7 inches LCD screen. This screen size will make Huawei can fit the body design become more easy to hold with one hand, but of course using 2 hands will more convenience. For better performance of screen view, HUAWEI NEXUS 6P use AMOLED and Corning Gorilla Glass version 4 for screen protections. This phone also have 4G LTE for broadband network. Some people call this phone with Phablet.

What is Advantage of HUAWEI GOOGLE NEXUS 6P  Specifications:

How to Fix or Problem Solving for Recovery HUAWEI GOOGLE NEXUS 6P hang or not responding or malfunctions or stuck or freezing or bricked ?

When we activate this phone, we will get several default applications which comes together with Android Marshmallow. But we still can install several important and interesting applications from Google Play Store like Facebook, Instagram, Whatsapp, WeChat, Line Messenger, Kakaotalk, Blackberry Messenger (BBM), Skype, Viber and many more. But we have to know that some applications at Google Play Store or especially offline APK files may contain some viruses or malware, if we install that applications, then our HUAWEI NEXUS 6P can become crash or hang or frozen or LCD touch screen not responsive. If we get this problems we have to force soft reset or force reboot or shutdown to delete temporary files and caches. After our HUAWEI NEXUS 6P can boot again, then we can try to install good antivirus applications to scan all suspected applications at HUAWEI NEXUS 6P. If the problems still happen, then we have to do hard reset or master format. Please note, doing hard reset will remove all important data or photos or videos inside HUAWEI NEXUS 6P, therefore we have to backup all important data first before doing hard reset.

How to Force Shutdown or Force Soft Reset or Reboot or Restart HUAWEI GOOGLE NEXUS 6P ?

After installing several applications from Google Play Store or if we downloaded or copy offline APK files, then sometime that applications can make trouble at our HUAWEI NEXUS 6P, although this phone can turn on or reboot, but after several time it will stuck or freezing or hang or LCD touch screen not responding in the middle of running applications. We can not do anything at this moment, because nothing happen when we touch the LCD screen. At this conditions, we have to force shutdown or force reboot or force soft reset to restart all running applications from beginning again. Please press and hold POWER button until HUAWEI NEXUS 6P turn off automatically, if our phone already totally off, then please press POWER button again until NEXUS 6P turn ON again. This process is safe to do anytime, because our important files will not remove or wipe. When our HUAWEI NEXUS 6P still work normally, but we need to clean temporary files and caches, then we can do soft reset or reboot by press and hold POWER button until pop-up menu appear, then choose Shutdown / Reboot / Power off. 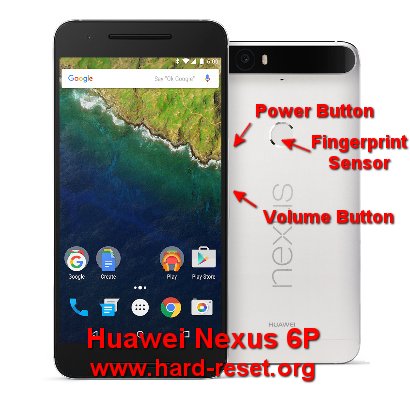 How to Unlock or Fix or Bypass or Solutions for HUAWEI GOOGLE NEXUS 6P forgot password code or security lock screen pattern or pin (lost password)?

Is That Any Secret Code for Doing Format HUAWEI GOOGLE NEXUS 6P ?

There is no secret hidden code for HUAWEI GOOGLE NEXUS 6P to make it back to factory default. Do the options above to hard reset it.