Both the devices come with similar specs along with a fingerprint sensor as well so let us see which device fares better in a one on one specs battle. It is going to be a tough decision, and I will try to make it easier for you to decide between the Huawei Honor 5X and LeEco Le 1s. 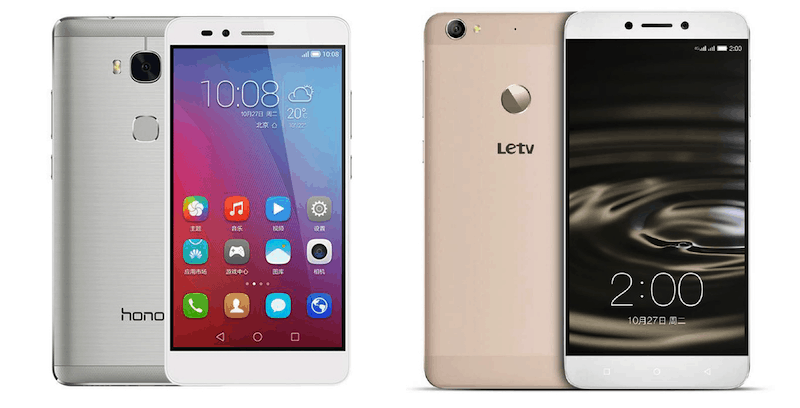 Both the devices sport similar display size and resolution with a 5.5-inch Full HD display with Resolution of 1920 x 1080 pixels. The picture quality, contrast, and viewing angles are almost similar in both the devices without much of a difference. One thing which stands out is the bezel-less front of the Le 1s, which is pretty good for a device in this range; the Honor 5X carries the typical Huawei design concept. Both the devices sport the Fingerprint sensor on the back below the camera module. Design wise it is up to users personal choice, and I liked the front of the Le 1s and the back of the Honor 5X.

The Honor 5X is powered by a 64-bit octa-core Qualcomm MSM8939 v2 Snapdragon 616 SoC, and the LeEco Le 1s is powered by a 64-bit octa-core Helio X10 Turbo SoC both the processors are said to be great in terms of performance. The Honor 5X comes with two variants having 2GB of RAM and 3GB RAM with expandable storage up to 128GB using microSD card. The Le 1s comes in 3GB RAM variant and 32GB internal storage space which is not expandable which can be a problem for users who prefer to have more storage space.

Both the devices were performing equally on initial hands on, they were good in multitasking and played some games well too. We will be updating the real performance comparison after reviewing the devices for some time and keep you updated.

The Honor 5X and the Le 1s come with Fingerprint sensor, both the sensors are located at the back of the device below the camera set up. The Le 1s comes with glass over the sensor to protect it from scratches and smudges and gives a glossy finish to the sensor as well. Both the Fingerprint sensors were working nicely, and the fingerprint was recognized most of the times in both devices. Both the devices run on Android v5.1.1 Lollipop OS with the respective UI over it, and both are good in their way.

Both the devices sport the same Battery capacity with 3000mAh battery powering both the devices, the Le 1s has the upper hand here with the option of fast charging, and it comes with Type-C USB whereas the Honor 5X comes with micro USB 2.0. Both support Dual SIM and 4G LTE, 3G HSPA, WiFi, GPS.

Both the devices are similar in terms of display, camera, fingerprint sensor, processor performance, etc. The main difference between the two is the presence of Fast charging feature in Le 1s along with Type C USB port which is absent in the Honor 5X. Regarding appearance and UI, it is up to the user and his or her personal preference to decide. The Honor 5X comes with expandable memory whereas the Le 1s has restricted storage which cannot be expanded further.

This makes the pricing of the device a major factor in deciding the best of the two and with the Le 1s priced almost ₹2k less than the Honor 5X makes the pricing very competitive. The Honor 5X is priced at Rs. 12,999 whereas the LeEco Le 1s comes at Rs. 10,499, which makes it a sure winner with between the two.

While we also know that Honor is doing quite well with the after-sales service, LeEco’s service centers are also in a good number already and the company is having good plans for the days ahead.