Having choices for smartphones is a good thing since the end buyer gets to choose the best and the competition helps to get a better device. But the confusion occurs when a single brand that you like has more than one option. That’s the case with InFocus right now, as the company launches a new smartphone in the budget range after having a couple of them already.

The newly launched smartphone from the company is named InFocus Bingo 21, and it is a new budget device that comes powered by a Spreadtrum processor. There’s nothing extraordinary with the phone, but at the same time, there are only a couple of aspects that might disappoint a bit, but you anyway won’t find a perfect phone at this price range. For the price of Rs. 5500, whether this phone surely stands tall against the competitors, we’ll find out in the review. 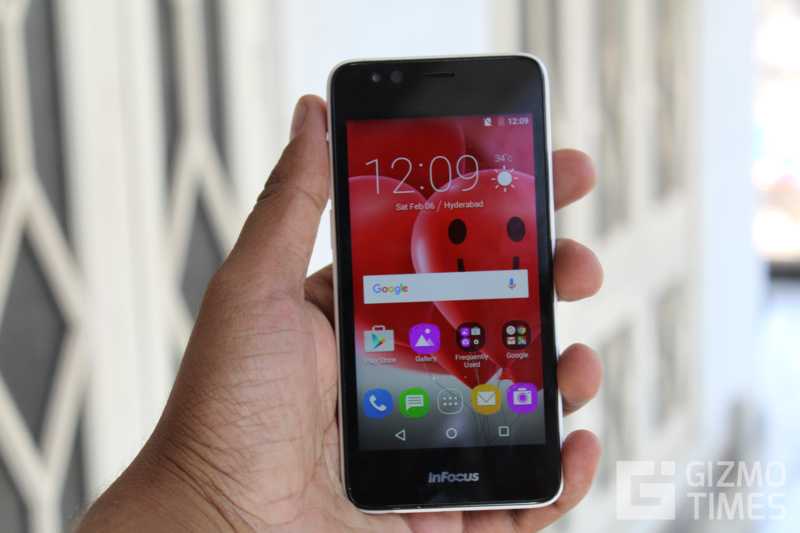 The Bingo 21, just like the other InFocus phones, has a design that doesn’t follow the other devices from the company. It is a totally different, refreshing and decent form factor, with a small size due to the 4.5-inch display, and a non-glossy plastic frame wraps around the side of the phone.

The back of the phone has a black panel that curves only at the edges, and the entire panel has vertical lines and the camera, InFocus logo parallel to the lines, and the speaker, all in a single line in the center. The power button here is a little circular button on the left side of the screen, and just below to it are the volume rocker buttons.

The back cover is well removable, and it allows us to pull out the battery, in fact, which has to be removed if the SIM cards or MicroSD card has to be pushed into the slot. The front has no physical or touch-based buttons outside the screen, and above the screen is the 5MP selfie camera along with an LED flash. Overall, the phone does look comfortable and is quite light to hold in the hand.

The display isn’t really good, as you are looking at a FWVGA resolution display, and even though the color output is good, we could easily notice the pixelation and it doesn’t seem well lit even on full brightness.

The good thing is, even though the hardware might not seem good for the display, there are some good display options that will allow the users to change the color temperature, screen mode (Standard and Dynamic), activate Bluelight filter for using in the night, and also change the navigation button layout (which is named as Softkey display). 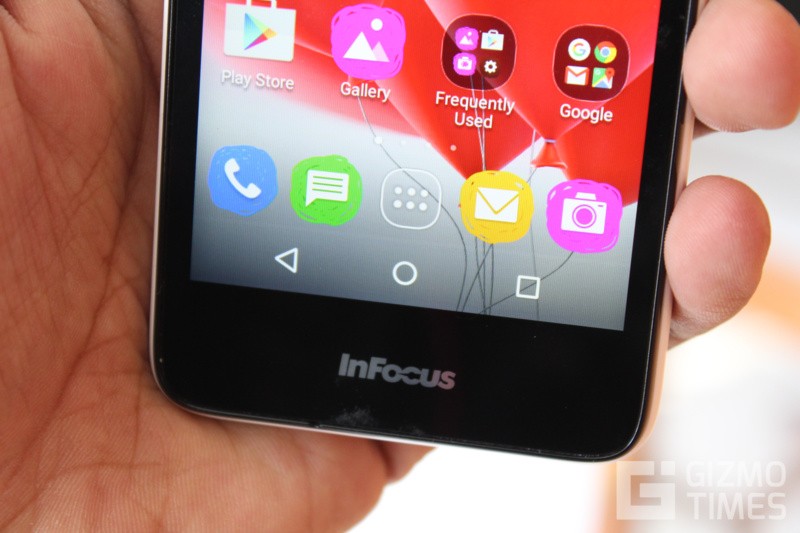 The touchscreen is very responsive, but it is a fingerprint magnet, and it easily retains smudges to force you to clean the screen regularly.

The InFocus Bingo 21 runs Android 5.1 Lollipop with the company’s own InLife UI adding some flavor, but the good thing is, you are not going to see any huge differences, so the experience stays the same if you have used one of the Android phones with stock UI. There are options to switch between Launcher+ and EZ Launcher, both of which have almost similar looks.

The lock screen has app shortcuts that can be set and edited by the user, and one can even choose to either show or hide notification content on the lock screen. The pre-installed apps in the phone include Backup Tool, Note, Power Detective, Mobile Assistant, Safebox, App Traffic Control, FM Radio, File Manager, Bobble, Facebook, and the Google Play apps.

Interesting to know that even for a device in this price range, there are quite a few good customizable options, including the setting to change the way quick settings appear in the notification panel. You can change the position of these quick settings based on how you need them though you cannot remove any of them.

For the performance, you’d usually expect not much from chipset makers like Spreadtrum, but the SC9830 quad-core chipset clocking at 1.5GHz hasn’t disappointed a bit with the interface navigation and not even while gaming, including games like Dead Trigger 2, Asphalt Nitro and such, though you won’t be able to make out the same with games such as Modern Combat 5. There’s 2GB RAM included, out of which around 1.2GB was free after a fresh reboot, and multitasking was a breeze.

Does the phone face any issues of heating or warming up while gaming? Not a single time that we had seen the phone getting warm or heated after playing games for over 40 minutes.

At times, it was a small glitch seen while browsing through the long contacts list, but otherwise, even switching between the apps didn’t show the phone struggling even a bit.

The camera combination seems decent on the numbers but it couldn’t impress on the camera performance. We tried taking pictures in different light conditions, and the phone could not come up with decent photos even in bright conditions with abundant natural light around the subject. 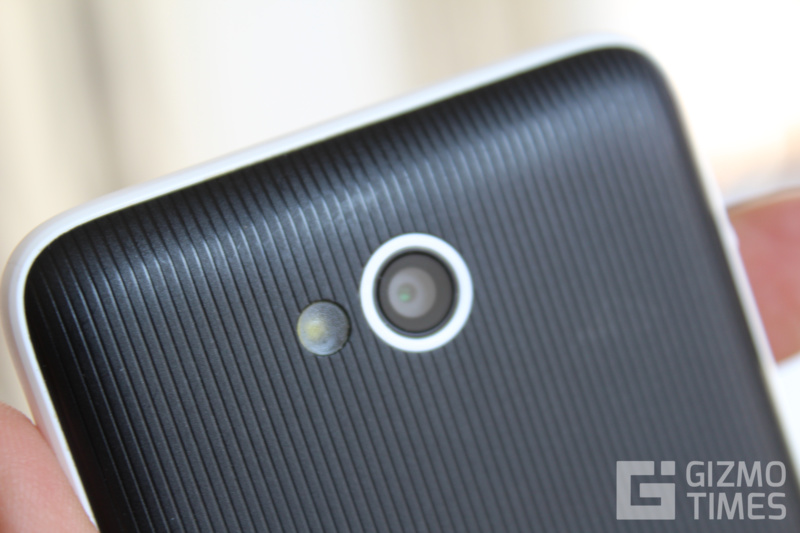 The problem with the camera was that the color adjustment was unstable and couldn’t set itself to come up with any similar reproduction of the colors. Though, on the other side, we could happily click selfies even in moderately lit conditions to low light surroundings as well, as the LED flash beside to it helped to an extent, if not being really great in brightening the face.

One of the important factors to consider while purchasing a smartphone in any price range is its battery. The 2300 mAh power given in the InFocus Bingo 21 could well last throughout the day on single SIM while it might just fall short when both the SIMs are active, and we aren’t talking about keeping the device aside but using it with a good three hours of screen-on time. The standby was great while the battery drain was considerably quick when using the phone in 4G network.

This comes in at a point where 4G LTE is on the rise and users might also want to go on making calls on the 4G network in the coming days. Looking at the limitations with MediaTek chipsets in this price range, Spreadtrum doesn’t seem like a bad deal since there is support for VoLTE in this, and the phone has good 4G connectivity as well.

The budget range of smartphones is filled up with offerings from every brand and while InFocus already has a couple of phones in that range, the Bingo 21 does seem like a good choice for those who don’t like to fuss around with custom stuff given by brands and who expect a decent performance, though at the cost of cameras.

Who are the competitors in this price range? Pay a little more and you get the Xiaomi Redmi 2 Prime, and the other ones are Yu Yunique, Phicomm Energy 653 and offerings from Micromax, Lava, and from Intex as well.