‎InFocus has a number of upcoming smartphones running Android Marshmallow OS and benchmark website – GFXBench seems to confirms this. Some days ago, the InFocus M820 was spotted on the benchmark listing and now it is the turn of the InFocus M460. ‎ 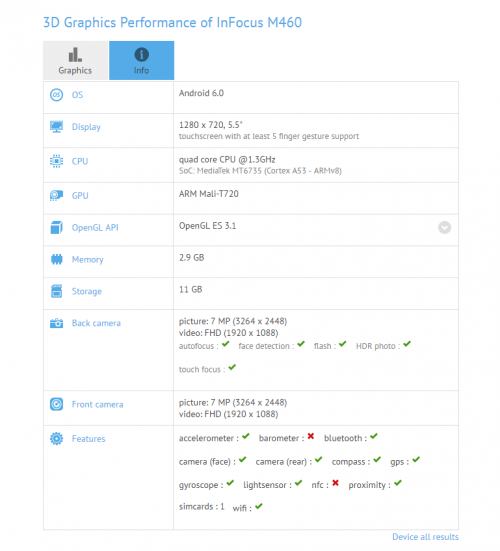 ‎‎
According the benchmark listing which only has the InFocus M460 specs but not the images, it is expected to slot into the mid-range category but we can’t say anything on the design. The device sports a 5.5-inch (1280 x 720 pixels) HD display, a pixel density of 267ppi and runs Android 6.0 Marshmallow OS. ‎

Under the hood, it ‎relies on a quad-core Mediatek MT6735 processor clocked at 1.3GHz along with ARM Mali-T720 GPU and 3GB of RAM. Internal storage space on the M460 amounts to 16GB out of which 11GB is available to the end user and a microSD card slot should be made available for expansion. ‎
‎
For photography, there is a front facing 8-megapixel camera for selfies and video calls and a rear facing 8-megapixel AutoFocus camera with LED flash; both cameras have 1080p Full HD video recording support. The InFocus M460 has the usual standard connectivity options such as Wi-Fi, Bluetooth and GPS but skips on NFC. ‎