‎An upcoming smartphone from Oregon based, US company, InFocus has been put through it paces on benchmark website – GFXBench. The device, listed with the model number – InFocus M820 (could turn out to be the final name) is a high-end device which is expected to launch in the nearest future. 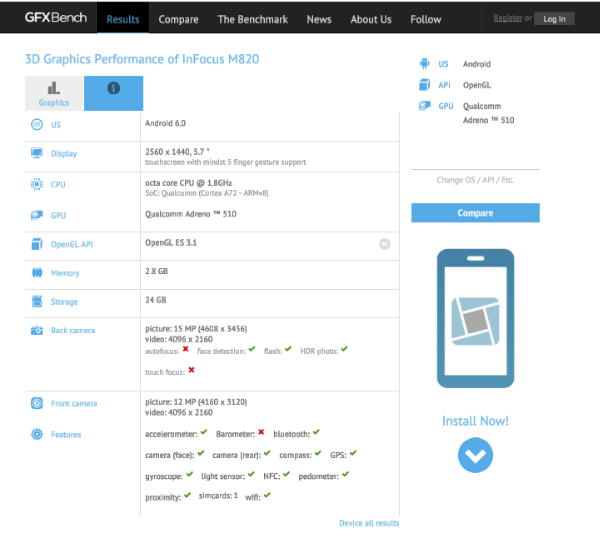 According to the listing which has the InFocus M820 Specs but not the images; the phablet sports a 5.7-inch touchscreen display with 2560 x 1440 pixels (QHD) screen resolution and relies on octa-core Qualcomm Snapdragon 652 64-bit processor clocked at 1.8GHz with Adreno 510 GPU.

The device has 3GB of RAM to handle tasks, 32GB built-in storage space for handling apps and files (out of which 24GB is user available) and run Android 6.0 Marshmallow OS out-of-the-box. For photography, there is a rear facing 16-megapixel camera with flash and a front facing 13-megapixel camera for selfies and video chats.

We look forward to what the device will look like when it goes official, till then, watch out this space for more details. ‎
‎