LeEco which was earlier known as LeTV has launched their latest phablet device the Le Max which comes with an impressively huge 6.33-inch QHD display. Although having a huge display the device is not as huge as you might expect thanks to the amazing 80.3% body to display ratio. Apart from the display it comes with some impressive specifications like the Snapdragon 810 SoC found in many flagships like the OnePlus 2 which was one of the Flagships launched last year.

Let us look at some of the devices which can compete with the LeTV Le Max although not in terms of screen size but with the overall specifications and the performance or the Processor which is being used. OnePlus 2 is one such device which can be an alternative to this device if the screen size is kept aside. Let us see the comparison of both these devices in detail. 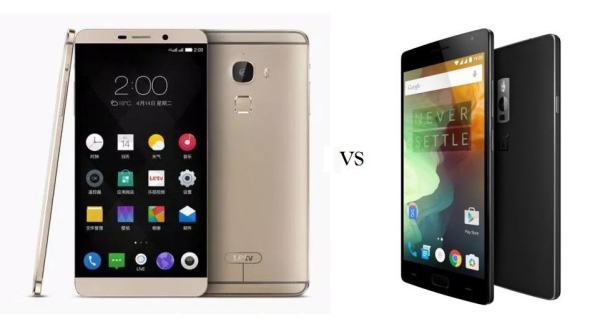 The Le Max has a bigger and better display in terms of size as well as resolution compared to the OnePlus 2. The Le Max sports a 6.33-inch QHD display with resolution of 2560 x 1440 pixels compared to the smaller 5.5-inch FullHD display of the OnePlus 2. Even in terms of pixel density the Le Max has 464ppi in comparison to the 401 ppi pixel density of the OnePlus 2. If you do not mind having a bigger display, the Le Max is the winner, but for many a 6.33-inch display in a smartphone (phablet) is too huge to carry around and the smaller OnePlus 2 will be the choice for many.

Both the device sport the same Qualcomm Snapdragon 810 SoC but the Le Max clocks higher at 2GHz whereas the OnePlus 2 clocks at 1.8GHz. Both the Snapdragon 810 SoCs are the second generation variants which are said to have less heating issues.  In terms of Storage the Le Max comes in two storage variants of 64GB and 128GB whereas the OnePlus 2 comes in a 64GB variant with expandable storage option using microSD card slot.

With the bigger display and higher resolution in the Le Max the similar Snapdragon 810 SoC although clocked higher might give less performance than the one on the OnePlus 2, here the less resolution and smaller size display lets the OnePlus 2 go slightly ahead in terms of processing power.

In terms of pixels the Le Max wins by a huge margin sporting a 21MP rear camera with OIS, LED flash, Sony imx230 sensor and 6P lens, 4 Ultrapixel front camera with 2.0 ultra-micron pixel size, 5P lens and f/2.0 aperture. The OnePlus 2 on the other hand, comes with a 13MP rear camera with f/2.0, OIS, laser autofocus, dual-LED flash and a 5 MP, f/2.4, 1080p@30fps capable front camera. Both the camera set ups seem quite good but the Le Max seems to do better job in capturing images in low light conditions, the front camera in the Le Max fares good under all conditions and the focusing is better while taking selfies.

The LeEco Le Max comes with a 3400mAh battery in comparison to the 330mAh battery in OnePlus 2. With a bigger display and higher resolution the OnePlus 2 gives better battery life, but the absence of fast charging in OnePlus 2 is a let down although it sports a similar USB Type-C port. Both the devices come with Fingerprint sensor, the OnePlus 2 has it on the Home button below the display and the Le Max on the back of the device below the camera. The positioning of the Fingerprint sensor is useful on the Home button as it can be used when placed on your table without the need to lift the device to unlock your device and view Home screen.

The huge difference in the Screen size makes the choice of Display size the main criteria to choose between the 2, if you are a person who does not mind bigger displays the Le Max can be considered a good option, in case you are not happy with the display size then the OnePlus 2 it is as it comes with a manageable 5.5-inch display which is just Full HD compared to the QHD 2K display in the Le Max giving it an edge in terms of resolution. Both have similar internals and perform almost similarly, one difference is with the camera, the Le Max performed better under low light compared to the OnePlus 2.

With the price difference between both the devices and some additional features in the Le Max, the OnePlus 2 seems to be ahead although it has a lower resolution display, lack of fast charging, lower resolution camera. If the Le Max was priced below the Rs. 30,000 mark it would have been the sure winner in this comparison.