LG has announced its first ever modular smartphone – the LG G5 at the MWC 2016. The company’s latest flagship now has a sleek anodized aluminium metal body build along with 3D Arc Glass design, instead of plastic, a slide-out removable battery and an innovative modular design. 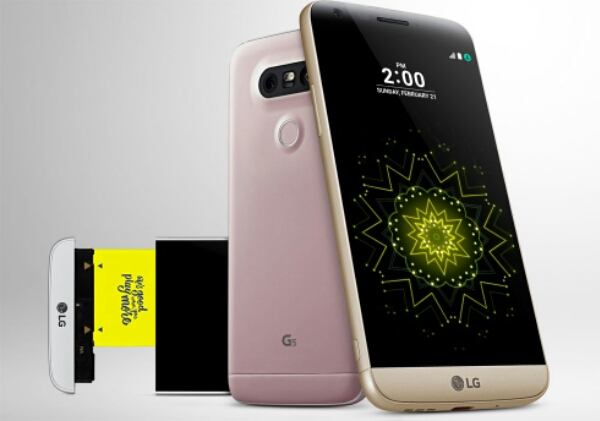 The LG G5 goes with a smaller 5.3-inch IPS Quantum display compared to 5.5-inch display on the LG G4 but the screen resolution remains the same – 2560 x 1440 pixels (QHD). It has the ‘Always On’ feature which shows date, time and various notifications even when the device is in sleep mode.

The display uses a new feature called Daylight Mode which adjusts the screen brightness accordingly with those of the immediate environment, boosting it up to 800nits if need be – this means clear visibility in the dark and even under the sun.

Under the hood sits the Qualcomm Snapdragon 820 processor along with 4GB of RAM, 32GB UFS storage, a microSD card slot and a 2800mAh battery with Qualcomm Charge 3.0 .

Like the LG V10, the LG G5 has Dual Camera setup but this time around it is used on the main camera. The two cameras on the back are: 16MP camera with 78-degree lens and a 8MP camera with 135-degree wide angle lens which is said to be 15 degrees wider than normal field of view of the human eye and 1.7 times that of other smartphones.

The front facing camera is a 8MP snapper for selfies. The G5 runs Android 6.0.1 Marshmallow OS with the company’s UI ontop, supports 4G LTE networks whilst also retaining the IR Blaster, uses the USB Type-C port and the power button which incorporates the fingerprint sensor remains on the back but the volume controls has been moved to the side.