LG has started to send out invitations for the launch of their latest flagship smartphone the LG G5. Slated for a pre-MWC launch, the date is set on February 21st which is ahead of the Mobile World Congress starting from 22nd February. The day is getting exciting as there are two Flagship devices being launched, the other one by Samsung hosting the unpacked event to launch the Galaxy S7 and S7 Edge.

There have not been any specifications revealed by the company but according to rumors, the device is said to sport a 5.3-inch Quad HD display along with a ticker display seen in LG V10. It will be powered by 64-bit Snapdragon 820 SoC coupled with 3GB of RAM and 32GB internal memory expandable using microSD card slot. 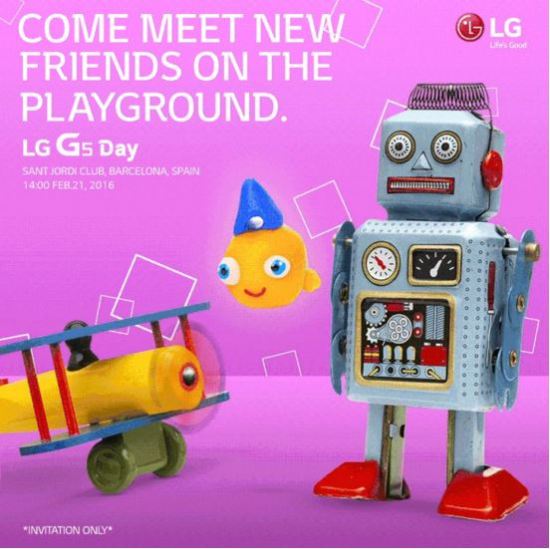 The LG G5 is said to sport Dual 16MP rear cameras along with laser autofocus, 135-degree wide angle lens and dual-tone flash along with 4K video recording, the front camera is  an 8MP shooter. The device will run on Android 6.0 Marshmallow. It will obviously be sporting the fingerprint sensor the location of which will be one to watch out for and supports connectivity features like 4G LTE / 3G HSPA+, WiFi 802.11 a/b/g/n/ac, Bluetooth 4.1 LE (APT-x) , GPS.

The device will be powered by a 2800mAh battery which is said to be removable. There were many speculations and rumors about LG changing the design of the G5 compared to the G4 which has to be seen. With the LG G4 setting a standard in photography being one of the best smartphone cameras around, we have to see what the G5 has to offer. According to the invitation the G5 the event is set to take place at Sant Jordi Club, Barcelona, Spain on February 21st, Sunday and starts at 14.00 CET which is 6.30 PM IST. The Samsung unpacked event will be taking place later that evening at 19:00 CET which is 11.30 PM IST.