Browse: Home / Molami Stitch headphones – If style and sound had a baby, this would be the result [Review] – hard-reset.net 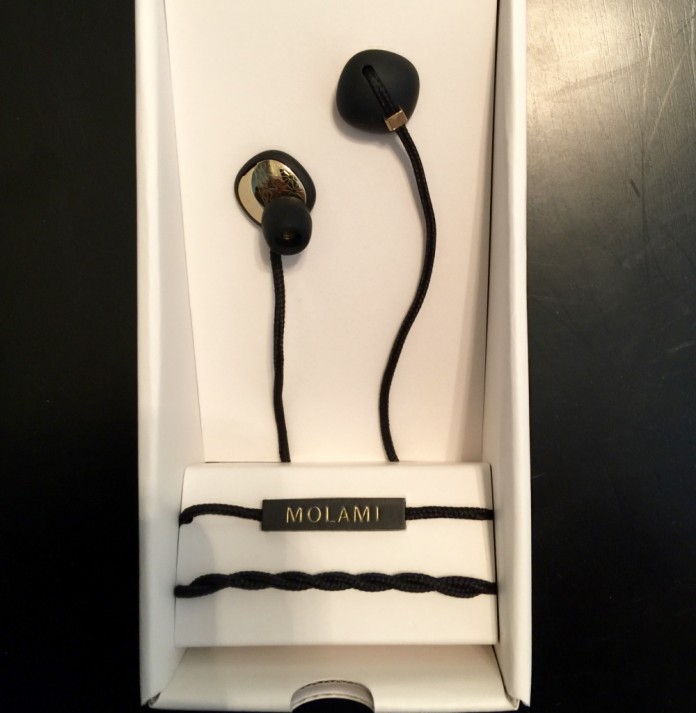 These days, when it comes to choosing a pair of headphones, the choices are dizzying! There are hundreds of pairs on the shelves at Walmart; half that on the shelves at Target. There are thousands to choose from on sites like Amazon.com. To bring some order to this chaos, we typically stick to the brands we know and trust: Sony, Philips, Harmon Kardon, Beats by Dre. Most of the time, the higher end products from these brands cost $100+! You get what you pay for but not all of us have wallets deep enough to drop that much money on a pair of headphones.

The trick is finding headphones that strike a balance between price and sound quality. You don’t want to pay a ton, but you also do not want to compromise on sound quality. This sometimes is an impossible feat. Enter: Molami Stitch. 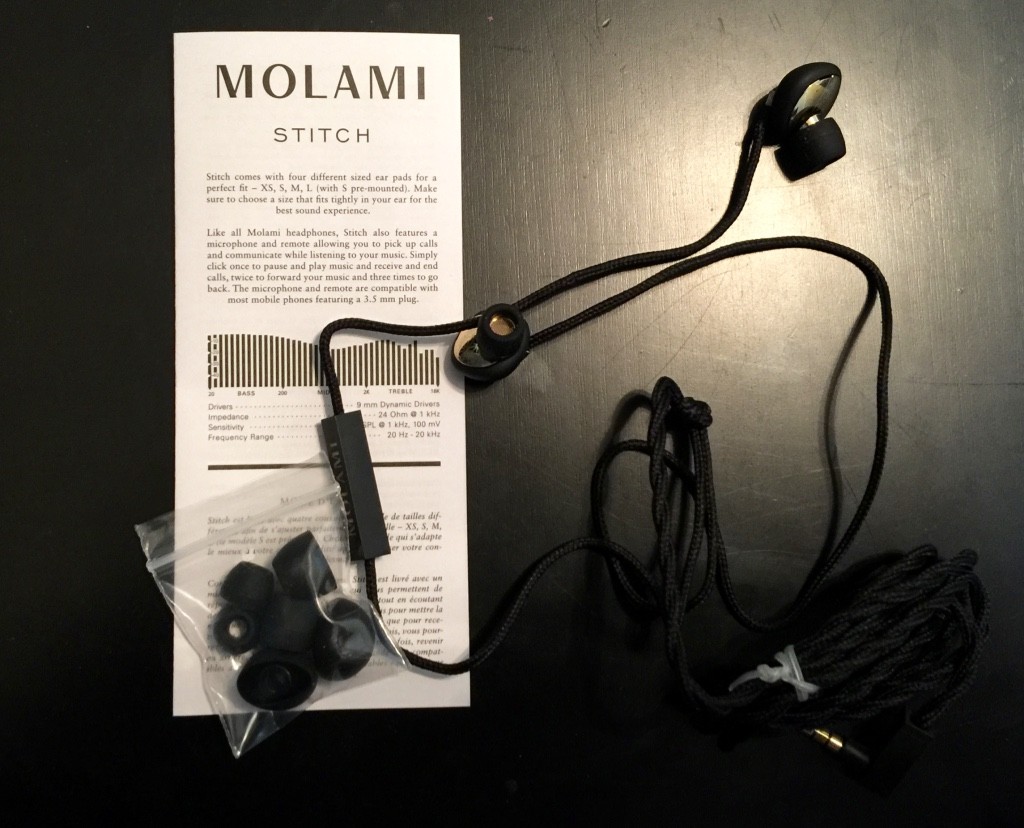 I’ve not seen a pair earbuds quite like the Molami Stitch’s before. When I first opened the packaging, I immediately noticed that the earbuds’ wires were covered in a woven fabric instead of the usual rubber that we’re used to seeing on the likes of Apple’s earbuds and its competitors. This was a magnificent first impression and gave the earbuds a nice, premium feel. 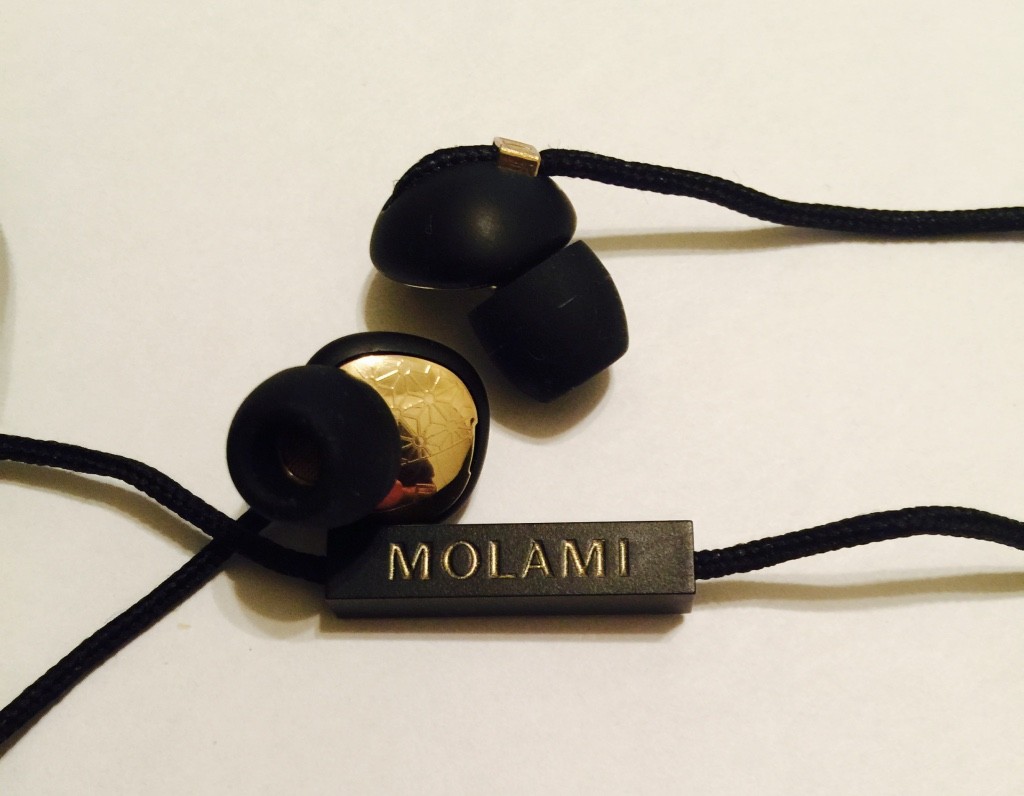 I next noticed the gold accents on the earbuds’ inline mic and on the earpieces themselves. The plastic behind the ear tips is a metallic gold and creates a wonderful contrast to the matte black of the earpieces themselves. When looking inside of the ear tips, it was a pleasant surprise to see that the speaker grill was gold as well. It was nice to see this level of consistency, even on a part of the earbuds themselves that most people will rarely look at. Kudos to Molami for this design touch.

The Molami Stitch earbuds use a standard 3.5mm headphone jack. The connector itself is housed in an L-shaped block of plastic with Molami’s ‘M’ logo stamped in gold on top of it. The plastic feels solid and lightweight.

The only complaint I have with the physical design of the Molami Stitch earbuds is the inline microphone. The plastic that houses the microphone feels thin and cheap. There’s a definite hollow feeling as well. I don’t necessarily get the impression that it would break easily, but I also wouldn’t be surprised if I did. As premium as these earbuds feel everywhere else, it was shocking to find something of such poor build quality on them. I simply do not understand how Molami can be okay with this microphones build quality. People I spoke to on the phone could hear me just fine through it, but there’s a foreboding feeling of being able to accidentally rip the microphone off of the earbuds’ wire with little effort.

I was very impressed with the sound quality of these earbuds. I received these in the mail about a day before a road trip, which was perfect because my wife was driving and I was planning on listening to my favorite podcast during the four hour car ride.After spending several hours with them in my ears, the Molami’s still felt very comfortable. I never felt sore and I never felt like I needed to rip them out of my ears.

During the car ride, the more immersed I became in the podcast I was listening to, the more I began to feel like I was sitting in the same room as the podcasters. I could close my eyes and picture myself sitting at the table with Ian and Pat as they broadcasted (I was listening to the “Completely Unnecessary Podcast” that Pat The NES Punk hosts). This is a great testament to how good the sound quality you get from these earbuds is.

The bass levels were not the punchiest I’ve heard in a pair of earbuds, but they were well balanced and not overpowering. The mids sounded very balanced and level, as well. Neither was overwhelming or overly intense. Unfortunately, the highs are where the Molami’s really suffer. There was a slight tinniness to the higher pitched frequencies that came through them. It wasn’t piercing and it did not detract from what I was listening to, but I could tell it was there nonetheless. The tinniness is a little on the subtle side, so the average user may have to really “listen” for it, to hear it. I have pretty sensitive hearing which is more than likely why I noticed it. I should also mention that I never noticed any sort of distortion when I would listen to something at a higher than usual volume using the Molami’s.

For $45, The Molami Stitch earbuds are a great choice if you’re in the market for a new pair of headphones. I love the twisted fabric wire coverings and the black with contrasting gold accents, color scheme. These earbuds look, feel, and sound like something that should cost double what Molami is charging for them. Even with the cheap feeling inline microphone and subtly tinny highs in the sound, I have no issue with giving a positive recommendation to the Molami Stitch earbuds.

You can buy a pair of Molami Stitch earbuds here.