Earlier today, Turkish based, General Mobile announced a new Android One smartphone – the General Mobile GM 5 Plus at the MWC 2016. It runs stock Android 6.0.1 Marshmallow OS out-of-the-box and will customarily receive updates directly from Google for up to two (2) years.   ‎

Judging by the specs, ‎the General Mobile GM 5 Plus is one of the top-range Android One smartphones in the market because the specs surpass most of the others. Packed in a plastic body with metal frame, it sports a 5.5-inch (1920 x 1080 pixels) Full HD IPS display with 2.5D Corning Gorilla Glass 4 protection and about 79% screen-to-body ratio. ‎

Backed by a 3100mAh battery with Qualcomm’s Quick Charge 3.0, the GM 5 Plus relies on a Qualcomm Snapdragon 617 octa-core processor clocked at 1.5GHz with Adreno 405 GPU, 3GB of RAM, 32GB built-in storage space and a microSD card slot for storage expansion up to 128GB. 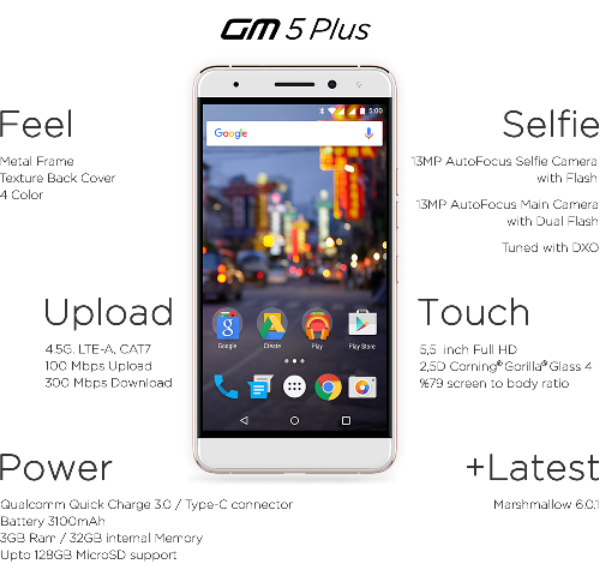 In the camera segment, there are two 13MP AutoFocus camera on the front and rear; the front camera has a single LED flash while the rear camera has Dual LED flash. The General Mobile GM 5 Plus uses a USB Type-C connector and supports 4.5G LTE-A connectivity.

The GM 5 Plus is available in four colour options for a price tag of TRY 999 in Turkey and EUR 199 in Europe. ‎
‎