WhatsApp has crossed the 1 billion users marks to join the elite club. The milestone about the messenger owned by Facebook was announced by WhatsApp co-founder and CEO Jan Koum via and official post on Facebook.

In a recent update WhatsApp was shown having 900million users as of September 2015 and reaching the 1 billion mark in just four month adding another 100million is amazing. WhatsApp was acquired by Facebook two years ago for a staggering $22 billion. Recently WhatsApp also announced that they will not be charging the annual $0.99 subscription fee. 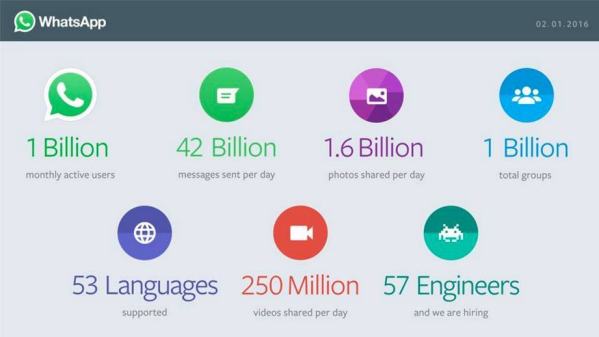 With many new updates coming on WhatsApp like business-to-customer and encryption of all messages, we can expect a further increase in number and usage of WhatsApp in near future. Jan Koum in his facebook post shared an info graph with other numbers as well.

Using WhatsApp there are a total of 42 billion messages being sent per day, 1.6 billion photos being shared per day, 1 billion total groups have been created, 250 million videos shared per day and supports 53 languages. These are some impressive numbers along with the number of engineers working shown as 57 and interestingly mentioning that “we are hiring”.

WhatsApp, commenting on the milestone in a blog post, said, “Our mission has never changed. WhatsApp began as a simple idea: ensuring that anyone could stay in touch with family and friends anywhere on the planet, without costs or gimmicks standing in the way. So even as we celebrate this achievement, our focus remains the same”