A lot has been said on the upcoming Xiaomi Mi 5 smartphone from last year up to this point and as things stand, all the fuss won’t stop till the device goes official. The Mi 5 has been put through its paces on GFXBench benchmark test and as it is the norm, we got to see the key specs of the upcoming device. ‎
‎
According to the Xiaomi Mi 5 Benchmark listing, the device sports a bigger screen size than expected – a 5.7-inch display and the screen resolution is a (1920 x 1080 pixels) Full HD one instead of the previously rumoured (2560 x 1440 pixels) Quad HD resolution. The quad-core Qualcomm Snapdragon 820 clocked at 2.1GHz (2x Kryo @ 2.1GHz + 2x Kryo @ 1.6GHz) is still the choice of processsor along with Adreno 530 GPU. 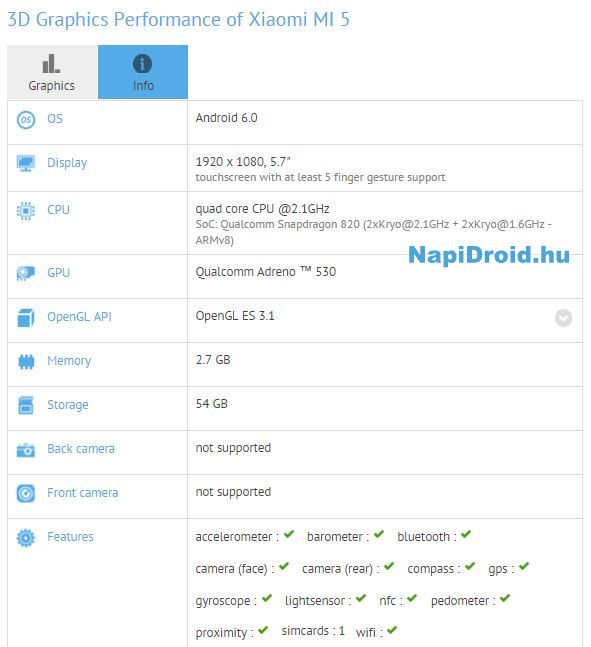 ‎
The device packs 3GB of RAM, 64GB built-in storage space (54GB available to the end user) and runs Android 6.0 Marshmallow OS. The listing does not have information on both the front and rear camera but the device has Wi-Fi, NFC, GPS, Bluetooth connectivity as well as accelerometer, barometer, compass, gyroscope, pedometer and proximity sensor options. ‎
‎
The size of the display has virtually killed the existence of the so-called bigger and more premium version (called the Xiaomi Mi 5 Plus) with Quad HD screen resolution and 4GB of RAM. We look forward to seeing how the device turns out as a launch event is expected in about two to three weeks from now.