Xiaomi Redmi Note 3 which has been launched sometime back in China getting tremendous response will be launched in India on March 3rd with the company announcing the date on their Official forum page. The event is going to be held in New Delhi. With the Mi 5 launch event scheduled in couple of days, being held at Barcelona at the ongoing MWC 2016.

The Redmi Note 3 is a great looking device with a  lot of discussion going on around the launch of the device in India. There are two devices launched in China, one device sporting a Helios X10 processor and the recent variant sporting a Snapdragon 650 SoC. It comes with an all metal body and an fingerprint scanner at the back of the device below the camera. 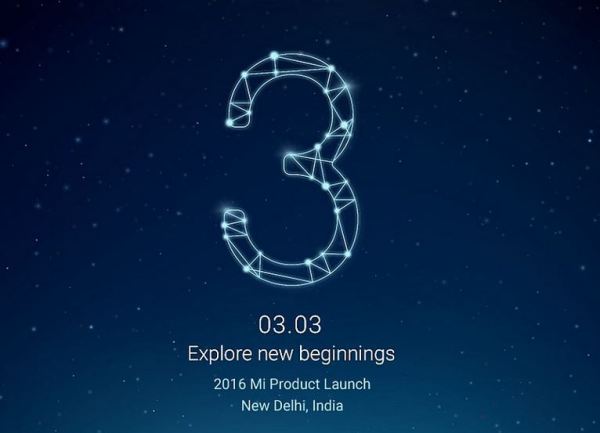 Both the variants of the Note 3 launched in China sport a 5.5-inch fullHD IPS display with resolution of 1080 x 1920 pixels and offers 178 degree viewing angle. It comes in two variants based on RAM and Storage – one with 2GB of RAM and 16GB inbuilt storage, the other variant has 3GB of RAM and 32GB of inbuilt storage. It runs on Android 5.1 Lollipop based MIUI 7 OS. The device sports a 16MP rear camera with PDAF and dual tone flash along with a 5MP front facing camera.

It comes with a 4050mAh battery and supports fast charging which can charge up to 50 percent in 1 hour. It comes in an all metal body measuring 150x76x8.65mm and weighs 164 grams. The Redmi Note 3 comes with connectivity features like 4G LTE, Bluetooth, 3G, GPRS/ EDGE, GPS, Glonass, Wi-Fi, and Micro-USB. The device supports LTE cat 7 speeds along with VoLTE which allows support to make voice calls over 4G LTE.